Illegal Offences to Avoid While Driving in Australia 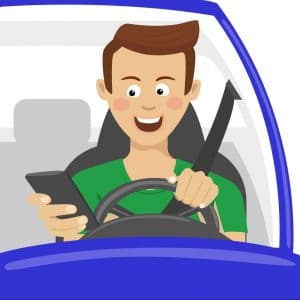 If you’re driving in Australia for the first time, you will probably do your best to obey the common road rules. We’re talking about the obvious things like driving when you’re sober, not overspeeding, keeping off your phones, and stopping at red lights.

But forget about those common road rules for a minute, there are some little-known traffic offences in Australia that you’ve probably never heard of. Still, the law doesn’t care and if you’re caught committing those illegal offences in some states, you could end up paying a hefty fine.

What are we talking about?

Smoking While Driving with a Minor

In Queensland, you will be fined $252 if you’re caught smoking with anybody under 16 years. The same restrictions apply in New South Wales, Victoria, South Australia, and Western Australia.

It could be worse if you throw a cigarette out of your car window. Just don’t do it!

Forgetting the Key in the ignition

Thinking about stepping out of your car for a minute and picking out coffee or lunch? Don’t leave your car keys in your ignition. Besides doing it for safety purposes, you could also avoid a fine; especially if you’re in New South Wales.

Apparently, at least 1,000 people are fined every year for leaving the key in the ignition.

Improper Use of a Horn

Believe it or not, you could get fined for honking your car horn to tell your family goodbye in the morning. Moreover, tooting your horn in a road rage frenzy could get you fined in most Australian states; you could even get 3 demerit points.

The only time you’re allowed to use your horn is when it’s absolutely necessary; like if you’re warning animals or road users to give you space.

Not Giving Way to Animals

Speaking of animals, you will probably encounter a lot of animals in rural Australia. It’s considered illegal in most states to refuse to give way to an animal that is already crossing the road.

If you see an animal that is crossing the road (domestic or wild), you should slow down and steer to avoid it as much as possible. Alternatively, you can move to the left side of the road, turn on your hazard lights and wait for the animal to cross the road without startling it.

However, this rule applies if the animal has already started to cross the road. It’s also common sense that the last thing you want is to hit an animal.

It’s rude, careless, aggressive, and inconsiderate behaviour on the road. Don’t splash water on pedestrians on the road! Otherwise, if you’re caught, you could end up paying a hefty fine in most states or territories. Not to mention, it won’t look good in your license if you get demerit points for that.

Having children or animals on your lap

This is a serious offence in Australia, and it could get you a heavy fine of up to $5,500. It could even be worse if you can’t afford the fine and you end up spending 6 months in jail.

If you think about it, you increase the chances of severe injuries in case of an accident by putting your child or animal on your lap when driving. Besides that, it could cause you to be distracted.

It would be safer to restrain your child or pet in a special car harness or seat.

Trying to Speed Up While Being Overtaken

Trying to speed up while you’re being overtaken could get you two demerit points and over $300 fine in most states and territories; especially in New South Wales and Victoria. It’s dangerous too, and it’s the type of behaviour that could potentially cause an accident.

Technically, you could get away with wearing headphones while driving but if you get into an accident, you will be in trouble. That’s because it could be proved that the headphones you were wearing before the accident was a distraction. Basically, it’s no different than using a mobile phone while driving.

Leaving Your Windows Open at a Parking Lot

In some states like Queensland and Victoria, it’s illegal to leave your windows open with a space of more than 5cm when you go far away from your vehicle. The rule is for your safety since it helps to deter car theft. Don’t forget to also lock the doors whenever you step out.

Using your Phone at Drive-Through Service

Most people don’t know this, but if you use a phone to pay for a service at a drive-through and police is on sight, you could get fined in most states. That is still considered driving while using a mobile phone; which is a major traffic offence.

If you must use a phone to pay for your lunch or dinner, you should turn off your engine and pull up your handbrake before you proceed to take the phone out of your pocket; at least that way, you could avoid a fine.