Common Mistake to Avoid During the Practical Driving Test

Here is the thing; the candidates who pass the practical driving test are the ones who don’t make silly mistakes. Sure, you could be the best driver in your class, but a small mistake like driving 1 km/h over the speed limit could cost you the driver’s license.

You simply can’t afford to make any deal-breaking mistakes that would lead to an automatic failure. What are the common mistakes we’re talking about? Let’s have a look. 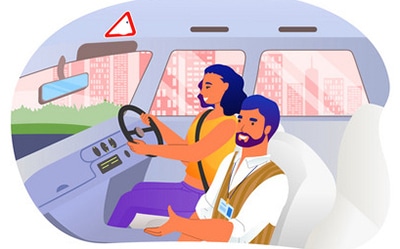 Forgetting to check blind spots before you reverse, turn or switch lanes will get you an instant failure. Most candidates pass that part without a problem. However, most people will forget to exaggerate their head checks so that they can be ‘seen to be looking’ by the examiner.

If you don’t move your head when checking for blind spots, the examiner will think you’re not doing it and you could lose a few points. Yes, you should do head checks even when looking at the mirrors. Alternatively, you can look at the mirrors and inform the examiner what you’ve observed.

The Australian driving test has a very strict speed limit rule; if you over speed even by 1 km/h, you can fail the test. Even if you meet a lenient exam officer, don’t take the chances and over speed.

Then again, just because you shouldn’t over speed, it doesn’t mean that you should drive too slow. You know, like driving 15 to 20 km/h under the speed limit? Instead, you should aim to drive not less than 5 km/h within the speed limit unless stated otherwise.

Another thing; if you’re at a stop sign and pedestrians are crossing the road, you should wait until the last person steps on the sidewalk.

Flickering your indicator for a second and driving off won’t do it; make sure to turn on the indicator for at least 5 seconds before driving out of a parking lot or switch lanes. Likewise, you should also signal when you’re in a roundabout, merging with traffic, overtaking another vehicle, making a turn and pulling over to the roadside.

The trick is to signal at precisely the right time; not too early or too late. Don’t forget, you should also signal even if there are no motorists or pedestrians within the area.

Believe it or not, nervousness is one of the most common reasons why most candidates fail the practical driving test. You see, when you’re nervous, you’re more likely to make more mistakes than somebody confident.

For example, you could be nervous and step too hard on the brakes causing the car to jerk. Or maybe you could step on the accelerator too hard when making a turn and you drive too fast. It’s the little things that count!

During the trip, you will encounter different road signs and the examiner may ask you to clarify what they indicate. If you forget the meaning behind any road sign and you disobey it, the invigilator will fail you. For that reason, it’s crucial that you familiarize yourself with the road signs along your test route a few days before the driving test.

Other than that, if you come across any hazards on the road such as kids playing in the street or a roadblock, it’s good to point them out to the examiner and act accordingly.

Not Listening to The Examiner

An effective method of keeping up is to reply with an affirmative. For example, if the examiner says “take a second right here”, you can respond by saying “okay, second right up ahead”.

In a nutshell, passing the Australian practical driving test is not that hard but you must avoid too many blunders. Even a negligible mistake like forgetting to put on the seatbelt and adjusting the mirrors before the driving test can cause you to flunk.

Most importantly, don’t make the mistake of trying to follow what other motorists are doing on the road. Remember, you will be held to a higher standard as a learner driver and you can’t get away with the same mistakes done by other drivers.